Last Challenge of 2016- Scariest Yet! 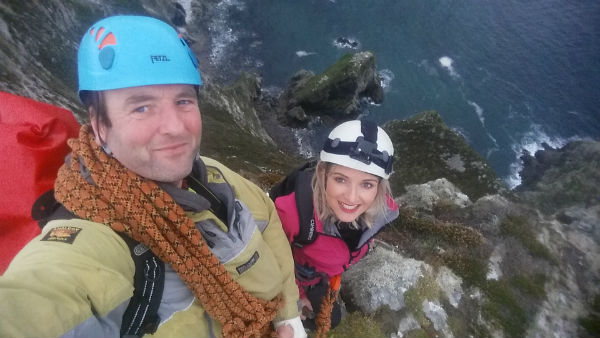 WELL, what can I say about my last challenge other than, holy Hell! I wanted my final event of the year to be a showstopper which it certainly was.

My climbing sensei, Iain Miller arranged for us to climb the Sturrall Headland which is one of the most outstanding sea cliff features in Ireland. Located near Glencolmcille, it stands at 180m at its highest point and is 800m in length. It has only been climbed a handful of times so I was excited to go where few have been before.
We arranged to meet in Ardara at 10am. I left my car parked and hopped into Iain’s to be transported the rest of the way. I may have mentioned in previous columns that my sense of direction is frighteningly bad so there was no point trying to find the area myself. I’m lucky to have made it as far as Ardara! We chatted amicably on the journey but as we neared our
destination I began to feel the familiar flutterings of nervousness. Iain is a man of mystery and never gives me a huge amount of information when he plans one of my challenges so I have to trust his judgement and pray that I will be able to do it! Thankfully he knows me well and always picks something exciting yet achievable. We pulled up to a gate which was located at the bottom of what looked like a winding pathway. I gathered my things and we set off.
We walked uphill for what felt like days before reaching an area of bog land. Passing an abandoned car (a 2000 Micra if anyone is interested), we made our way over the bog where I couldn’t help but notice how much wet turf resembled Oreo Biscuits (these are the intelligent thoughts that roll around in my head). Eventually, after approximately 3km we found ourselves at the top of a cliff and I found myself face to face with the infamous Sturrall Ridge. The view was breathtaking. The Atlantic crashed and whirred below us sending white spray up over the smaller rocks which were perfectly placed around the Sturrall. We picked an ideal day weather wise as there was little wind and the skies were less threatening than usual for this time of year. Once we had absorbed the view we began our trek to the summit. For those who have ventured as far as the cliff, you will know there is a fence that you can follow. We did this for a little while before moving away from it and over to the side of the headland. It was at this point that my crutches became a slight issue. 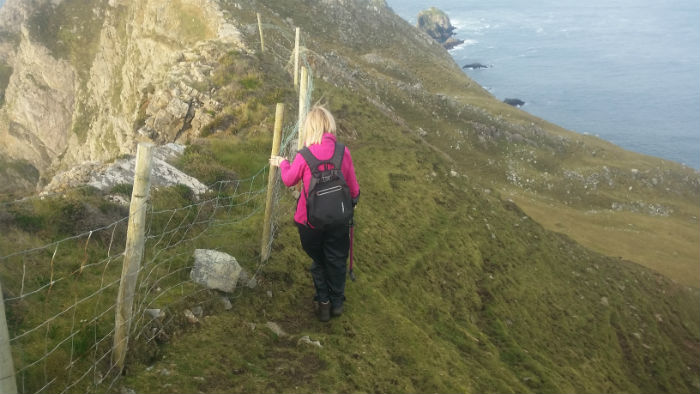 There was no man made path to follow and the area where we were walking was extremely narrow. Barely wide enough for your feet, certainly not wide enough for both feet and crutches. I resorted to using one crutch and held on to the headland with my other hand for balance. It was practically vertical in places. The trek was slow and arduous with high levels of concentration needed at all times. My foot placement was very important as we were walking on loose rock, one wrong move and I would have had an almightily roll down a rocky mountain before flying through the air and into the sea below. I like adventure but I draw the line at flying. We trekked for about an hour before the top came into view. I had one final haul to get myself up and over the top but when I did I was ecstatic! The view was out of this world. Literally everywhere I looked was amazing. It was windy at the top which pumped my adrenaline more. The summit was unbelievably narrow which meant a sudden gust of wind could do serious damage. 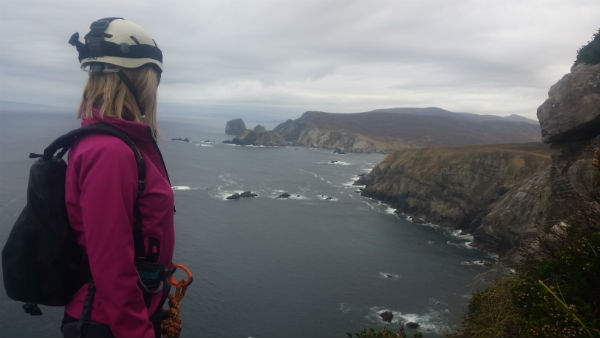 There was no denying the potential danger at the top but that made it all the more special for me. I loved every single minute and felt privileged to stand on ground so untarnished by man. It was a moment I am unlikely to forget and a trek that I will use as a benchmark for future adventures. Our decent was an event in itself as it involved abseiling off the summit and I am pleased to say it was a success. I had not managed to abseil correctly in the past as my leg was too stiff and awkward to make it work. My own fear was another large factor. In order to abseil in the traditional way you must lean right back on the rope. That’s all well and good until you realise you are on the edge of a rugged landscape with nothing but a rope preventing sudden death. Despite the loud screams from my inner self I leaned back and forced myself to trust the rope. I felt the rush of fear and excitement travel through my veins as I slowly abseiled to the safety of the rock below. I experienced a brief moment of panic where my ‘bad’ leg got stuck and I shouted a question up to Iain; ‘Can you pull me back up?’ to which he replied ‘Nope!’.. Fair enough then. Leaning to the left I grabbed a nearby ledge and used my arm to lift the weight off my legs. This released my leg and allowed me to continue with my descent.I was so proud when I reached the bottom and delighted to have been able to show Iain I could abseil correctly. We had an almighty trek ahead of us made more difficult by the fact that we were beginning to get tired. Just as night fell we spotted Iain’s van in the distance and I could have danced with happiness had I not been so exhausted. 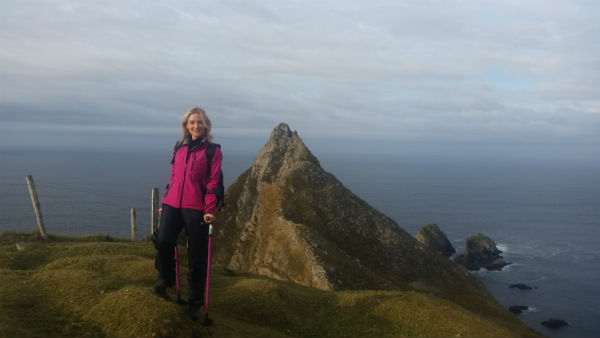 From start to finish this challenge was unbelievable. I had asked Iain to really push me to the limits and had even questioned whether the Sturrall was ‘exciting’ enough. Ha, how naive of me. Thank you so much to Unique Ascent for an unforgettable day out in the Hills of Donegal.
This challenge could not, and would not, have been carried out without the presence of an expert like Iain. Please do not attempt to do anything like this without seeking professional guidance.