Hello everyone. Apologies for my absence of late, I have been very bold and haven’t done much writing over the past couple of weeks. I hope you will forgive me, I have a good excuse though! 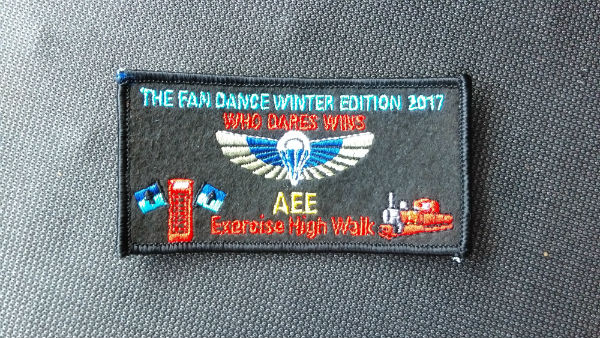 I was busy preparing for the toughest physical challenge I have faced since starting my campaign in 2013. ‘The Fan Dance’.
What is that I hear you ask? Well, in a nutshell, the Fan Dance is a 24km trek through the Brecon Beacons in Wales. (http://www.thefandancerace.com/)
I became familiar with the race last summer after my boyfriend Ian mentioned it in passing. After a little research I decided it looked amazing! Some time passed after that initial conversation but the idea of signing up for the Fan Dance didn’t leave my mind. I finally took the plunge before Christmas and signed up. That gave me roughly six weeks to prepare. Not a lot of time I think you will agree. Thankfully my training and weekly swimming lessons had kept me fit but they would not assist me with mountain terrain so the only thing for it was to head for the mountains. Over the Christmas period I did just that. Ian and I teamed up with Irish soldier, 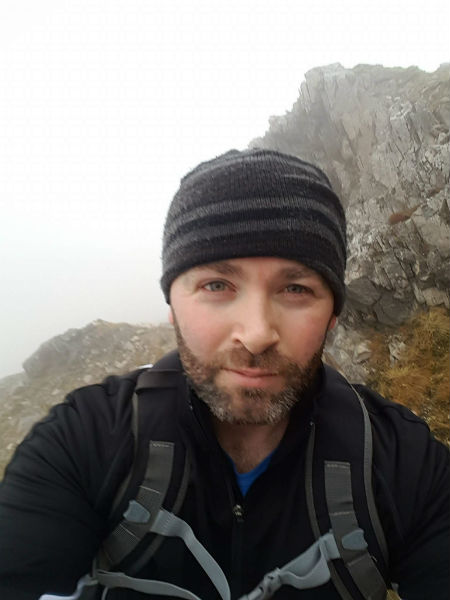 Billy Fanneran (pictured) who put me through my paces. We climbed the north face of Errigal, Muckish minor’s path, went on numerous long walks ending with an epic trek from the Poison Glen to Glenveagh carprark (pictured) 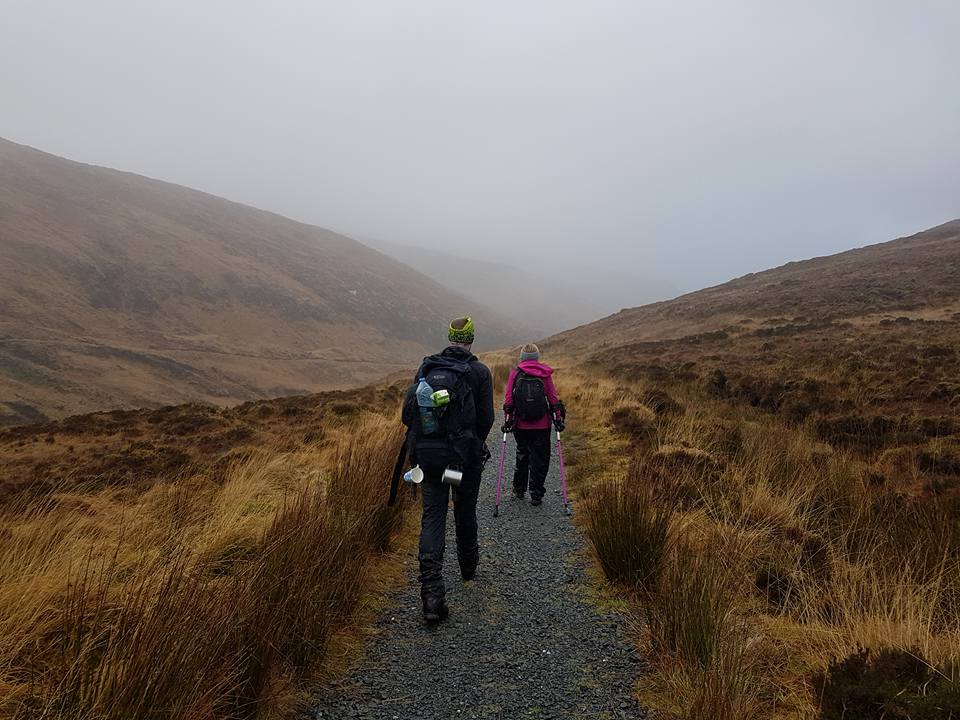 which covered 18.9km. Without the training I received from Billy I know I would not have been able for Wales so thank you Corporal Fanneran, your own unbelievable fitness spurred me on.

And we’re off!
On Friday January 13th Ian and I boarded the ferry to Holyhead where we then travelled for 3.5 hours to the Brecon Beacons. Heavy snowfall along the way made driving conditions difficult but we managed to arrive in one piece. We checked into the Storey Arms and had our first glimpse of the infamous red phonebox. It was at this point I began to feel the familiar flutter of nervousness building within. I am a firm believer in nerves being a good thing however so I embraced them and forced my mind to focus on the mammoth task ahead.
Saturday morning arrived and before we knew what was happening we were on our way! More snow had fallen over night and parts of the Pen Y Fan mountain were heavily encased with the white stuff. Snow drifts made walking ‘fun’ in parts. Have you ever found yourself walking along when suddenly your leg gives way and you lurch to one side? Well that’s what it felt like at times. My crutch would simply disappear into a snow hole but after a short time we managed to locate firmer ground and continued our uphill battle. The two major obstacles with the Fan Dance are ‘Jacob’s Ladder’ and ‘The Roman Road’. Ask anyone who has taken on the FD and they will be delighted to share numerous stories about either or both. Jacob’s Ladder is a long, steep surface with even steeper steps at the top of it. The Roman Road is a seemingly never ending road that snakes around the mountain. Visually both are fantastic, physically both are a nightmare! The first half of the trek was easier because we were going DOWN these surfaces.
We reached the half way point after approximately 3 hours but we had missed the cut off point. There was doubt as to whether I would be allowed to continue and I was gutted. Winter daylight meant everyone had less time to play around with and staying on the mountain after dark was not permitted within our group. I felt strong enough to continue and was genuinely heartbroken when I was told I wouldn’t be going any further. I walked away from the tent and took my backpack off sighing an almighty sigh. Suddenly Ian looked over at me with a big grin and a thumbs up, the guys in the tent had radioed the medical officer explaining that I was happy to continue. He then gave his blessing for us to move on. I was delighted! We turned and headed back the way we came with a smile and sore feet. I was tired by the half way point but I knew it was nothing compare to the hell that lay ahead. As mentioned, going down Jacob’s Ladder and the Roman Road was one thing, going UP it was a different kettle of fish altogether. The snow had melted in parts causing slush and mud to form. Tackling this on an incline was almost impossible. Almost… 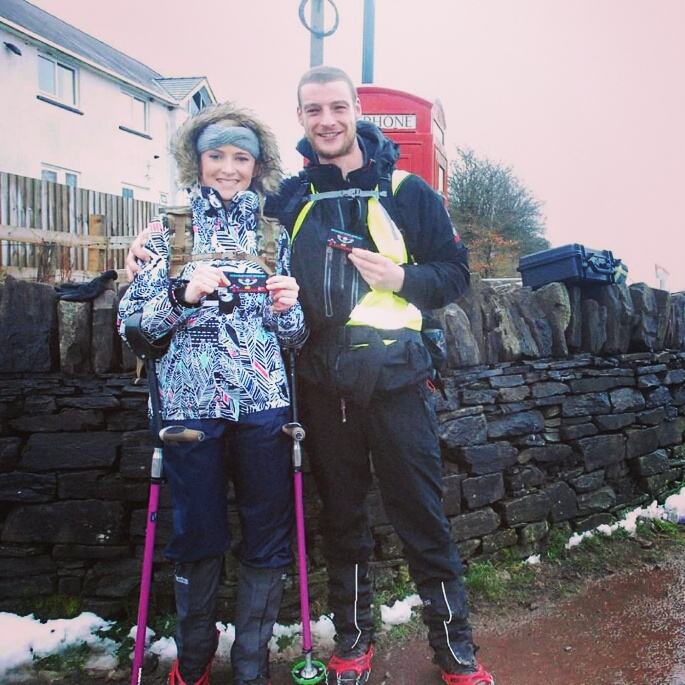 Ian kept my spirits up the entire way despite the fact he was carrying almost 40lbs on his back. He distracted me when I was struggling and the numerous people we met along the way also kept my motivational levels up. Hours later, we finally made it over the final hill and could spot the road below. I summoned every ounce of strength I had left and took off like a shot down the mountain. As we descended, the red phonebox came into view and I thought I was going to burst with pride. I was drunk with joy! My crutches were moving faster than my body could keep up with and I risked slipping but I didn’t care. We had made it. 24km in severe winter conditions… done.
The prize each successful participant receives at the end is a little different than the norm. Instead of a medal that you will wear on the day and then retire to the attic or mantle piece, the Fan Dance organisers gave us a patch (pictured above). This patch can be sewn onto your coat or backpack so you can take it with you on your next adventure. I don’t cry very often but I felt very emotional when I was presented with that patch.
The memories made on January 14th will stay with me for the rest of my life. The people I met, many of whom are ex service men, shared personal stories as we walked. Emotions ran high and tears were shed. (I would like to point out, the men cried, I didn’t. Big softies)
I have one more thing to do before I sign off on this most excellent adventure, and that is to thank my partner in crime, Ian.
You don’t just put up with my hare-brained ideas, you encourage them. You keep me on my toes and allow me to reach for the stars. You got me through the Fan Dance by demonstrating a level of patience usually reserved for saints. Thank you for bringing out the best in me.