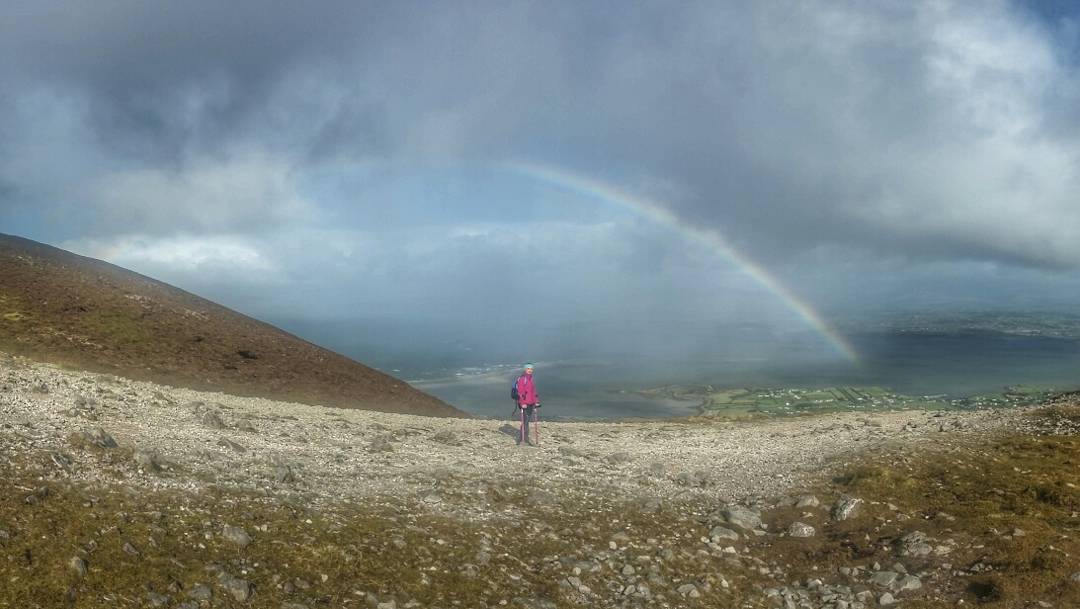 I woke at 4am to the sound of the howling wind and rain battering off my window. Suddenly the thought of climbing two mountains in one day seemed utterly ridiculous and getting up in the middle of the night to do so was ludicrous. I would text Iain and call the whole thing off and say no more about this silly idea.
Thankfully I was used to my brain being a lazy sod so I ignored my initial thoughts and dragged my sleepy body out of bed. I quickly dressed and put the final bits and bobs in my backpack before making my way out into the blustery Autumn morning. Pointing the car towards Mount Errigal, I set off on what would be an epic day of adventure.
(For those unaware, I plan to climb four of Ireland’s most iconic mountains next summer;  Carrauntoohil (Kerry), Croagh Patrick (Mayo) Slieve Donard (Down) and Mount Errigal (Donegal). We aim to do it in less than 24 hours and our first training day was yesterday)
I arrived at the base of Errigal just after 5am where I met my climbing sensei Iain Miller. I opened my door and almost lost it to the wind as a violent gust ripped through the car. I looked out into the wilderness but couldn’t see a thing. The rain was getting heavier and wind levels were rising. It quickly became evident that climbing in such conditions would be unnecessarily dangerous and I was relieved when Iain suggested we reverse our climbs. Instead of starting with Errigal we would make our way down to Co. Mayo and climb Croagh Patrick first. 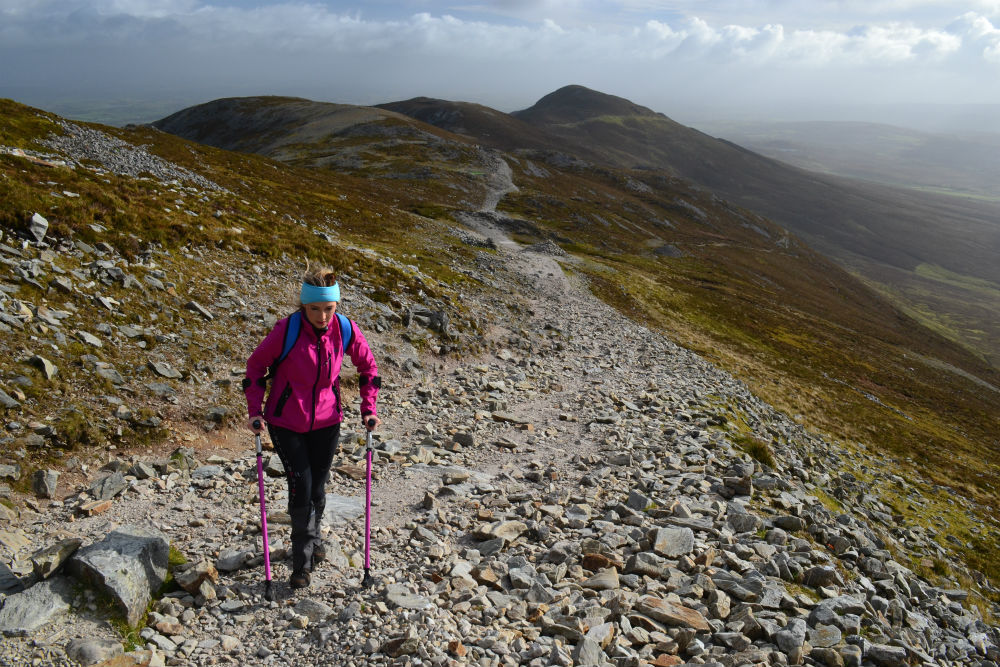 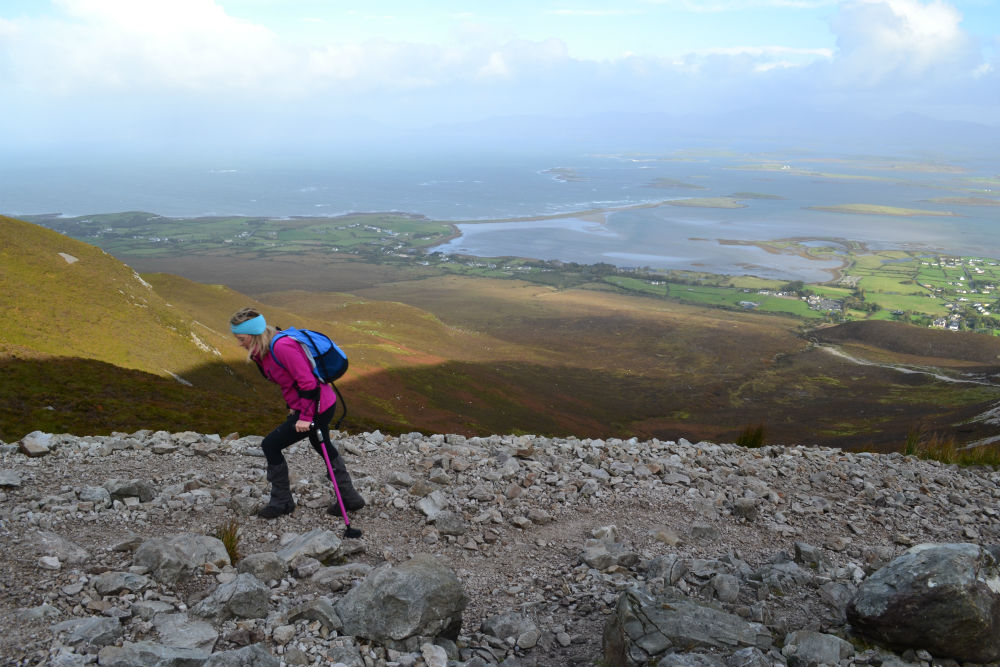 I hoped and prayed we would find an open garage on the way as my coffee craving was intensifying with every passing kilometre. My prayers were answered and afterwards I felt ready to face Croagh Patrick for the very first time. My first impression of ‘The Reek’ was a good one. Visually it was quite impressive and the walk up to the base was beautiful. I couldn’t help but think Errigal could do with having the same care and attention applied to it although some could argue Errigal displays an air of old school ruggedness that Croagh Patrick doesn’t. Either way we were there to climb so climb we did! We were relatively lucky with the weather and were spoiled with strong sunshine moments which made for perfect photo opportunities as you can see. The banter was good as we slowly made our way upwards and for the most part I was pain free. It was at the two thirds mark that I began to feel niggling pain but it was nothing I couldn’t handle. When we reached the summit we celebrated with a couple of pieces of Dairy Milk and a brisk walk around the chapel. It was ridiculously windy so we didn’t stay long before making our way down. The descent was harder than I expected. Usually I make up time on the way down but the combination of increased wind and loose stone underfoot forced me to tread carefully. I was beginning to tire by the time we reached the carpark and the thought of a three hour drive followed by another climb was not exactly appealing. However this was exactly why we were there. To experience the feeling of wanting to give up and to push on regardless.
If I were to choose a word to describe how Errigal looked at 4:30pm, I would say ‘angry’. The weather had not improved in Donegal and the winds were both brilliant and terrifying. I took roughly four steps out of the carpark before face planting the wet, slimy muck. A great start to our second climb I think you will agree. We battled the wind the entire climb. It forced us to stop in our tracks numerous times and it threw me around like a ragdoll. Mist turned to fog and daylight began to fade leaving us with a sense of urgency. We did not hang around on the summit. 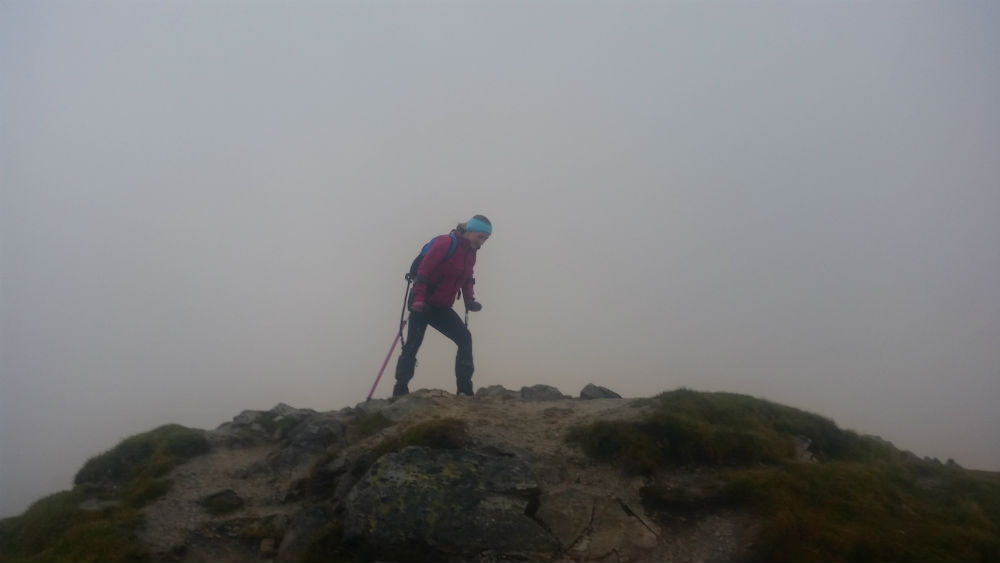 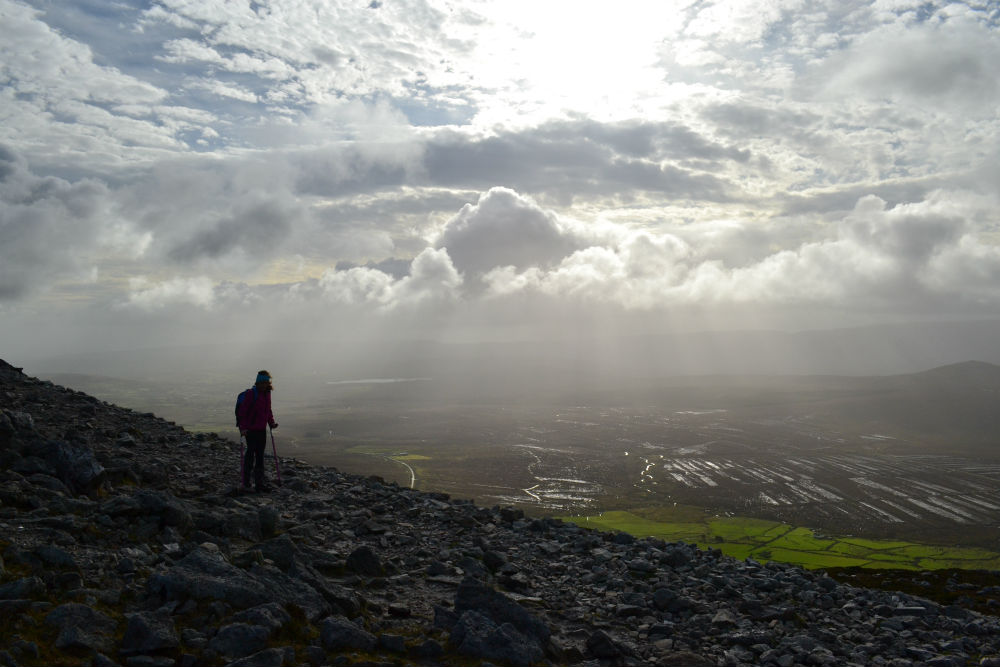 of the gust and we quickly made our way back down. It was smiles all around as we reached the carpark and I was reminded once again why I do what I do. When you push yourself physically and voluntarily place yourself in situations that are, at times, unpleasant, you get an exceptional feeling of pride and wellbeing when you come out the other side. I basked in that feeling as I drove home tired and happy.
Today, one day later, I am feeling more than a little battered. My body is stiff and my left wrist is swollen and sore. Normal daily tasks were difficult today and once this post goes live I am closing my laptop and putting my feet up! Tomorrow is a new day and the planning of our next day out can be done then.
This is just the beginning....