We Did It!!!- A Guinness World Record In The Bag! 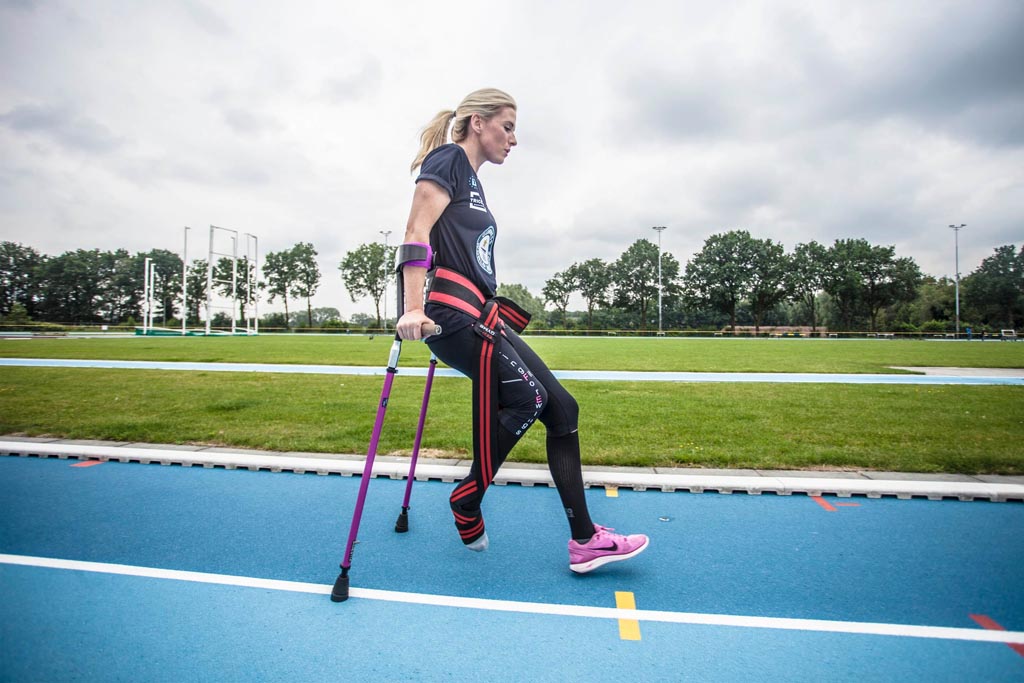 I still cannot quite get my head around it all! I had discussed my plans to attempt the record numerous times in my column with the Donegal News but a part of me didn't actually believe I would go ahead with it. When I applied to Guinness initially I thought it would be a simple process. However, once my application was accepted I began to realise that breaking a world record had less to do with the record itself and more to do with the paper work! It became a daunting task and as my leg began to worsen, pain-wise, my motivation to go ahead with the record attempt lessened. That all changed about five weeks ago when I spoke to an adapted athlete called Michael Robbert Brans. I found Michael through Instagram and began following him shortly after I returned from my last trip to the Royal Orthopaedic Hospital in Birmingham. I had received news that I would likely lose my leg and found Michael’s situation one that I 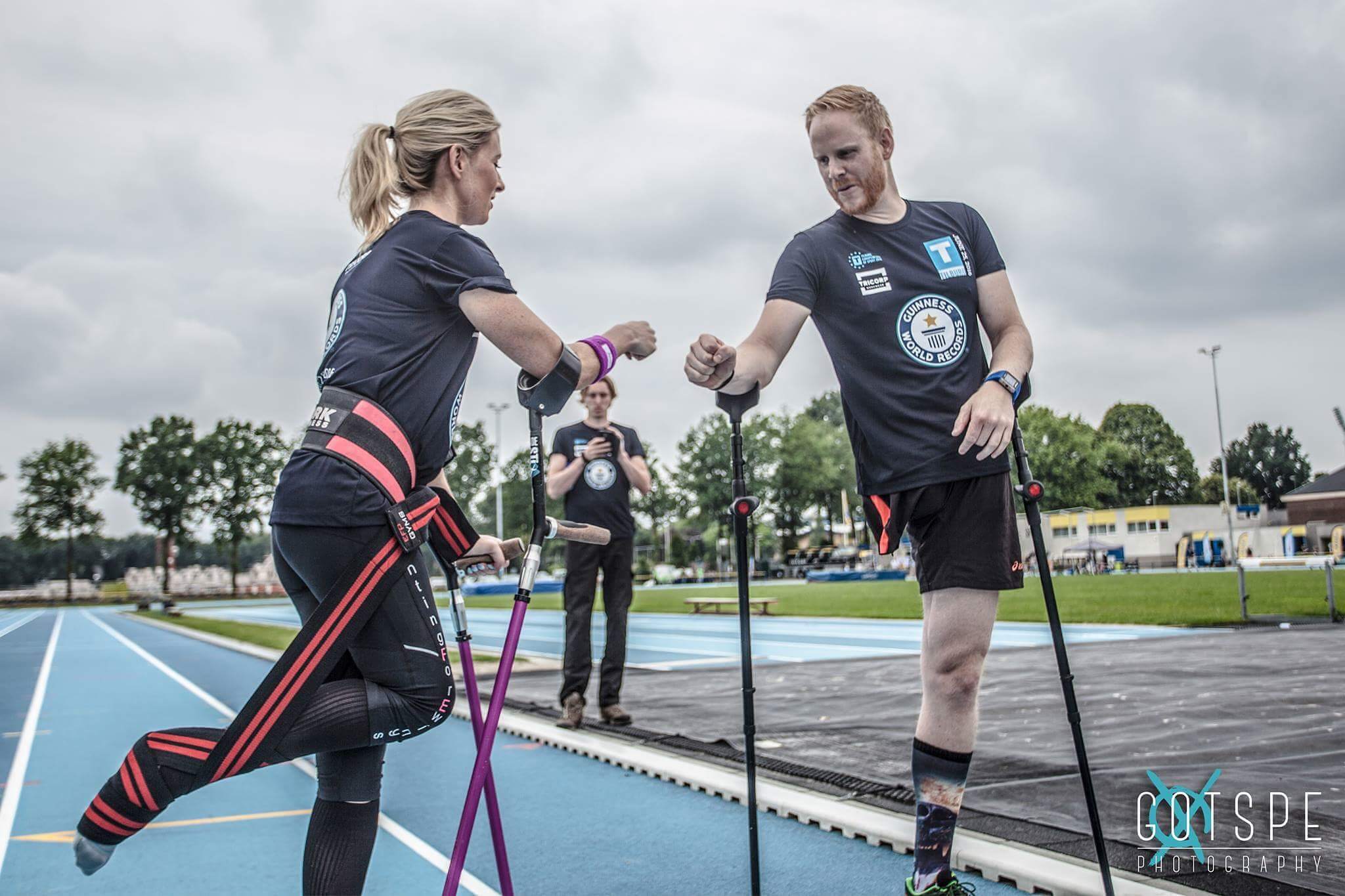 could relate to. Michael is an amputee who lost his entire leg due to three different cancer diagnoses. Despite the adversity he has faced, Michael has pushed through and achieved more than most of us would even dream of. As I was scrolling through Instagram one afternoon I spotted a post that forced me to stop in my tracks. Michael had announced he would attempt to break the Guinness World Record for the ‘Fastest 5km on Crutches, one leg, male’. I couldn’t believe the coincidence. He was planning to attempt the exact same record as me except in the male category. I contacted him on the spot and introduced myself explaining a little about my own situation and how we had quite a lot in common. He responded immediately asking if I was free for a Skype call. We spoke for almost an hour and it felt amazing. He showed me how he was able to move around without crutches and shared stories that eased my anxiety. It was so beneficial to speak with someone who understood what I was going through. Towards the end of the call, once I had plagued him with many questions about amputation, we finally got around to discussing the world record attempt. The 25th of June was the date he had set for his. We continued to chat in the days that followed and the idea of doing the record together in Holland came up in conversation. At first I dismissed it claiming there wasn’t enough time to book flights and to train properly! I train regularly in Fithub as you know but the type of preparation needed for this required using the track which I had not been doing. Surely the idea was ludicrous and it would end in failure? Or would it? Another Skype call with Michael and a very nice man named Hans followed and before I knew what was happening, I had thrown caution to the wind and booked my tickets! Hans reassured me that he would take care of the dreaded paper work associated with the record and reminded me that they were doing it for Michael anyway so it would be easy to do the same for me. Suddenly my world record attempt was back on!
I flew into Eindhoven airport on Friday 24th June where Hans was waiting. I thought I would 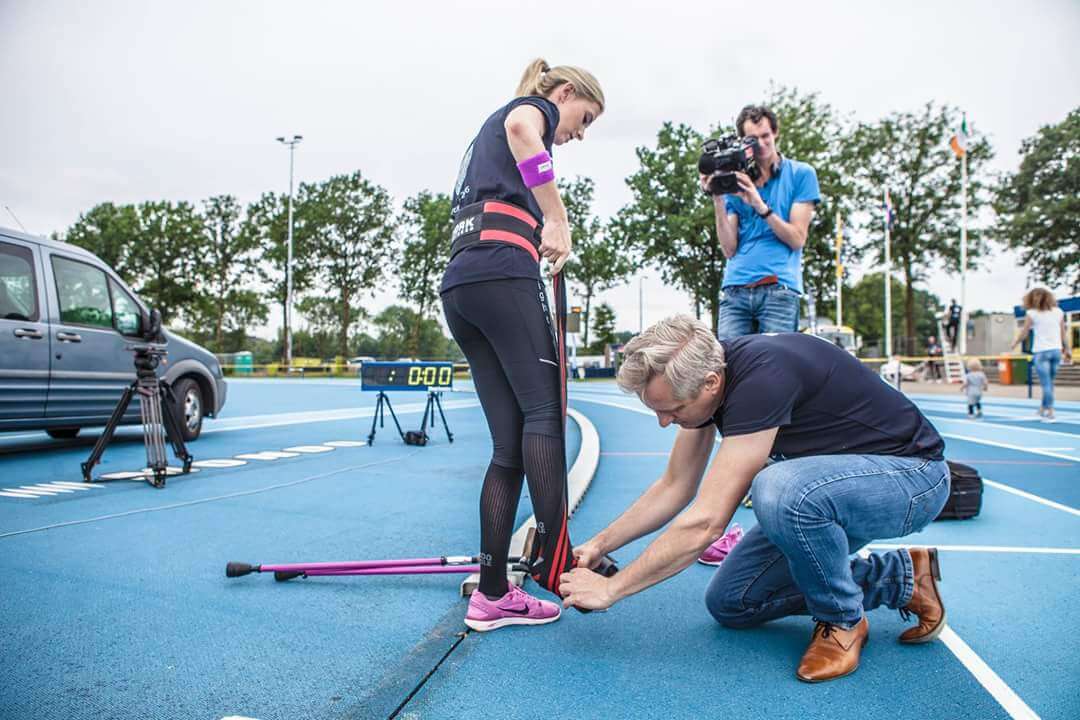 have felt a little nervous at the thought of staying with a stranger but he was the perfect host and even catered for my gluten free ‘habit’.
Saturday morning arrived quick and fast and I found myself standing on the Av-Attila track in Tilburg watching everyone arrive. I began to feel nervous at the thought of what lay ahead and I was suddenly very aware of a small secret only my trainer Neil and I were privy to. Due to the lack of time to train I had not managed to practice the full 5km on the track. 5 kilometres is 12.5 laps of an Olympic track and as I stood on the Av-Attila, I was painfully aware that I had only managed six laps in training. I decided to keep that little nugget of information to myself until after the event. 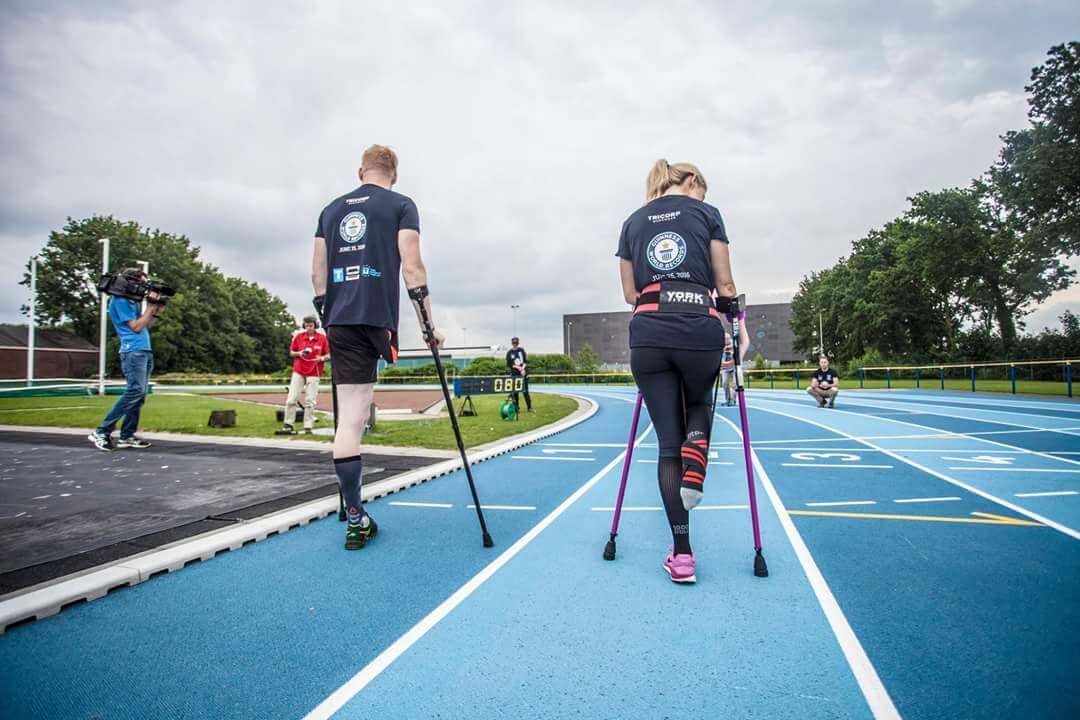 The sound of the starter gun scattered my nerves and I became instantly focused on the task at hand. I decided to aim for six laps to begin with as I knew I could at least manage that amount. I was half way around the first lap when the bandage holding my right leg off the ground slipped downwards. The rules stated that my ‘good leg’ must not touch the ground for the entire 12.5 laps. If my toe so much as grazed the ground it would result in automatic disqualification so it was advised to strap my leg to keep it up. Neil and I had practiced this but as I travelled to Tilburg without him I didn’t have his expert tying skills. I was painfully aware of my foot at all times and had to rely on the kindness of Sanne and Jona 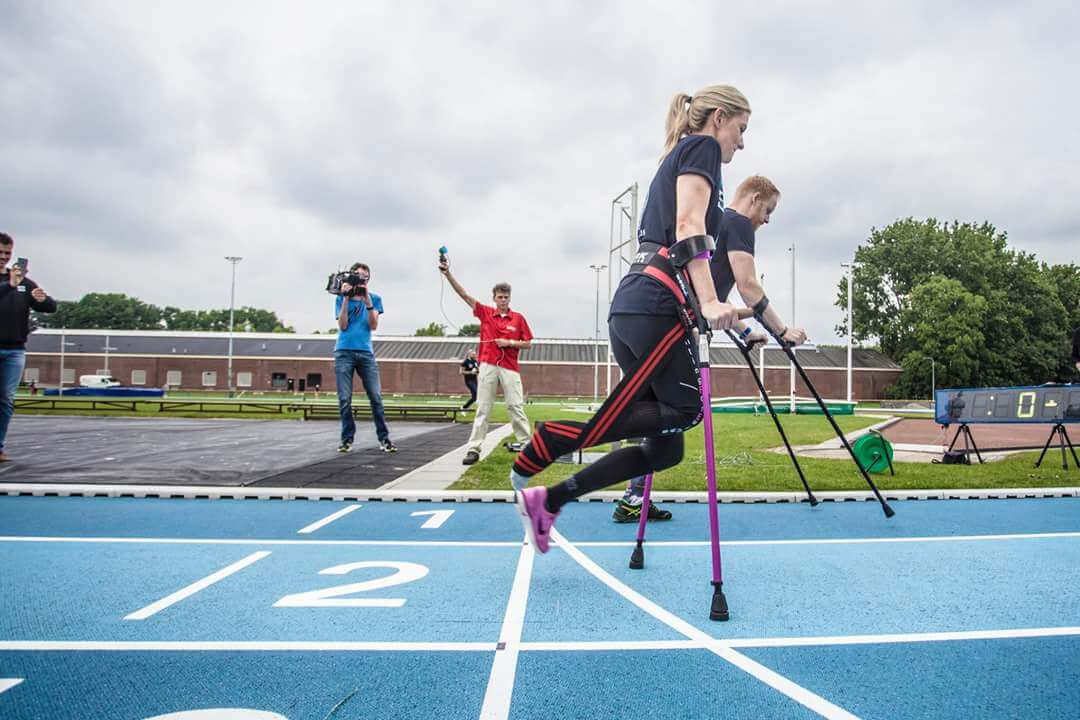 my camera buddies who ran behind me to film. I asked them to shout at me if my foot was near to the ground and Sanne’s voice shouting ‘WATCH YOUR LEG’ will be etched into my memory forever as a result. As I passed the seventh lap I allowed a small smile of pride to spread across my face. Regardless of what happened from there I knew I had gone further than I had in training and that made me feel good. The eighth, ninth and tenth laps came and went albeit a little slower than the first and second but as I rounded the corner heading for the 11th lap I knew I was going to do it. My mind was 100% focused on not dropping my foot and I allowed myself to slow down a little to ensure I didn’t mess up so close to the end. A bell rang out as I entered into the final lap and the crowd of supporters went wild! I felt a surge of adrenalin rip through me as I raced around one last time. The final 100 metres was magic. Twelve year old Jona ran behind me with the camera screaming 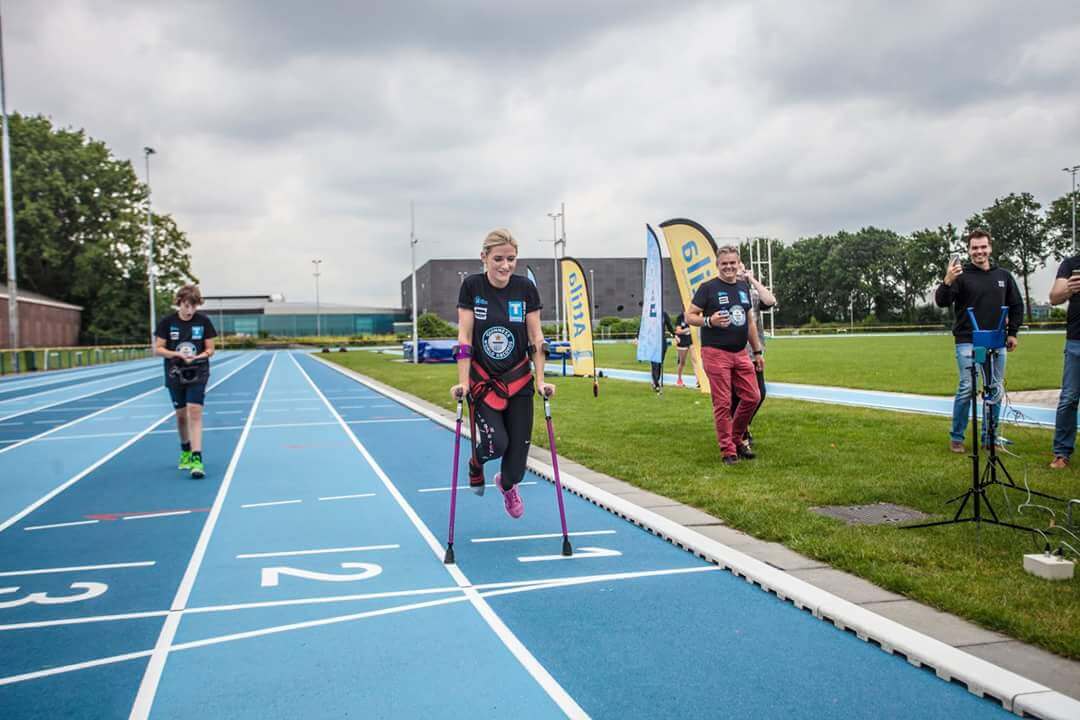 encouragement his voice escalating as I made my way to the finish line. The crowd erupted when my foot crossed the line and I hopped straight into a big bear hug from Michael who had finished a few minutes before me.
I was exhausted, red 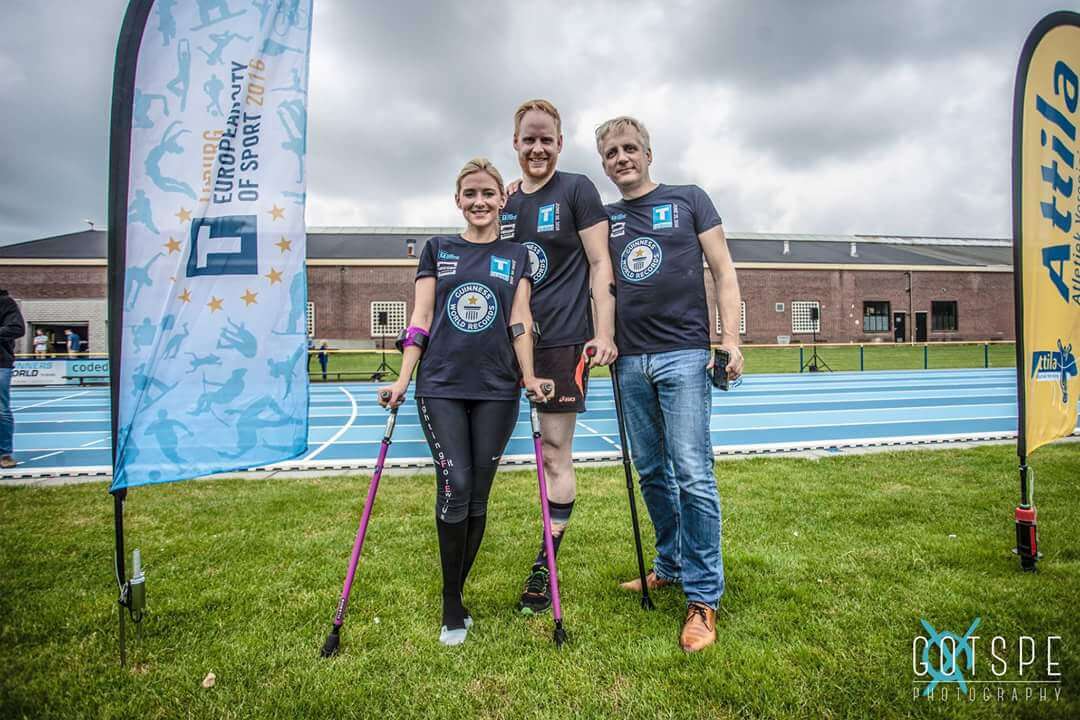 raced, streaky from fake tan and delighted all in one! The feeling of pride was so strong it threatened to burst out of me. I was and still am, so grateful to everyone who helped me break the record. Sanne, Jona, Anne-Marie, Michael and Hans- Thank you for everything. Neil Barrett, thank you for being a fantastic coach and a huge thank you to my family for being awesome!