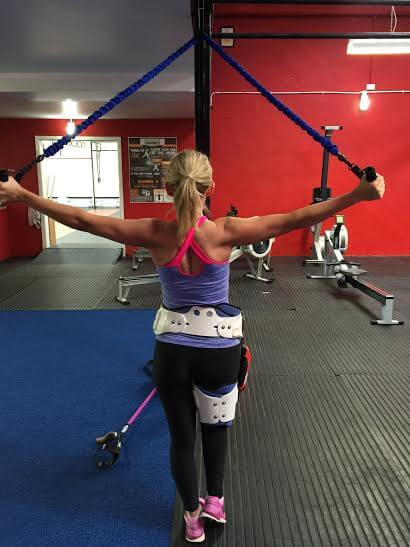 Exercise is the driving force behind almost all of Nikki’s projects. Prior to working out regularly, Nikki relied on medication to help alleviate the daily pain she experienced. Unhappy to stay on strong meds long term she wanted to try something different. Exercise, combined with healthy eating was the solution.

Exercise:
Adaptation is key.
In order to get the most out of her workout, Nikki first had to find a way to adapt each exercise to suit her needs. She has had help with this over the years from experienced trainers and it is not advised to adapt movements without the guidance of a professional.

After many attempts to strengthen her ‘bad leg’, Nikki eventually decided to throw in the towel and accept that it was never going to improve. By removing that leg from the equation she was able to focus on the areas of her body that she could improve. The result was amazing.
*There is no shame in abandoning Plan A as long as you have a Plan B.

Diet:
Nikki began following a gluten free diet in 2011 on the advice of her GP. Since then she has noticed a significant improvement in her energy levels and overall appearance. She became acutely aware of what she put in her body, avoiding processed food as much as possible.

On July 6th, 2015, Nikki began a twelve week six pack challenge in association with Fighting Fit For Ewing’s. Nikki followed a strict food plan that mainly consisted of fish and chicken with vegetables. Attempting this during the summer months was not easy. The diet was completely alcohol free which meant she pretty much became a hermit for the summer.
Diet and exercise feature heavily in Nikki’s life and over the years she has increased her knowledge on both subjects. If you have an event in the health/wellness sector that requires a speaker click ‘HERE’ to get in touch.